2014 is about to end and it has been a busy year for me in terms of watching movies. To write this post, I had waited for the release of PK because I had an inner feeling that this movie would feature in my list of favourites and I am glad I waited. This year has been filled with some great Bollywood movies and some terribly bad ones. I’ll spare the bad ones and highlight the good ones instead, so let me present you my top 5 favourite Bollywood movies of 2014.

Queen has to be the most beautiful movie made in Bollywood in recent times. It is one of the very few movies which actually gave me goosebumps! Who would have thought earlier that actress Kangana Ranaut could pull-off the role of Rani, the protagonist, with such flair and brilliance. But, she had mesmerized the audience with her beautiful potrayal of an independent woman who did not allow a broken marriage to pull her down and instead, learned to celebrate life in beautiful Paris and Amsterdam. You can read my blog post on the movie: Kangana Ranaut: The Queen of hearts! END_OF_DOCUMENT_TOKEN_TO_BE_REPLACED

It has been barely 2 days since the launch of first look of Aamir Khan’s to-be-released movie PK and the Internet universe has already exploded in reaction. The 49 year-old actor’s “bare-devil” act in the movie poster, where he is seen completely nude with just a transistor covering his manhood, has created a stir among his fans as well as the social media. 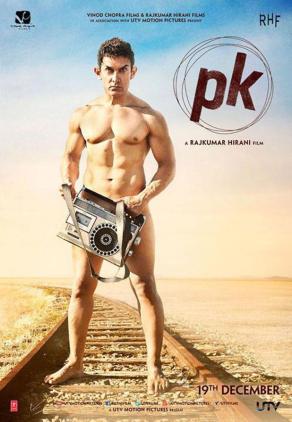 As I browsed through various websites covering the news and reactions of the people related to the poster, I came across quite interesting interpretations and humorous guesses on what Aamir’s role in the movie could be. But, one sentence actually caught my attention and aroused interest in me: “Reports have been doing the round that Aamir is playing the role of an alien, who lands on earth and since he is from another world, he doesn’t know what to wear.”

It took only a few seconds for me to stumble upon the thought that P.K. might just be heavily inspired from the American science fiction television series “Kyle XY“. Kyle XY is a story that revolves around the life of a teenage boy who awakens ‘naked‘ in a forest with no knowledge or abilities of a human being, and later is adopted by a family and named Kyle. Throughout the series, Kyle is shown possessing an extraordinarily gifted mind and abilities, and the viewers often get probable hints of his alien origin.

Now, if you look closely at Aamir’s face in the poster, he seems to have pointed ears, raised eyebrows, staring eyes and a weird expression. So, what if Aamir Khan actually essays the role of an alien from another world in space and lands on earth accidentally. What if the transistor he holds is a communication device with which he can converse with the beings on earth (that include birds, insects and every living thing!). What if he is adopted by an Indian family and taught to be a human.

My imagination seems to go wild!

Proud to be an Indiblogger